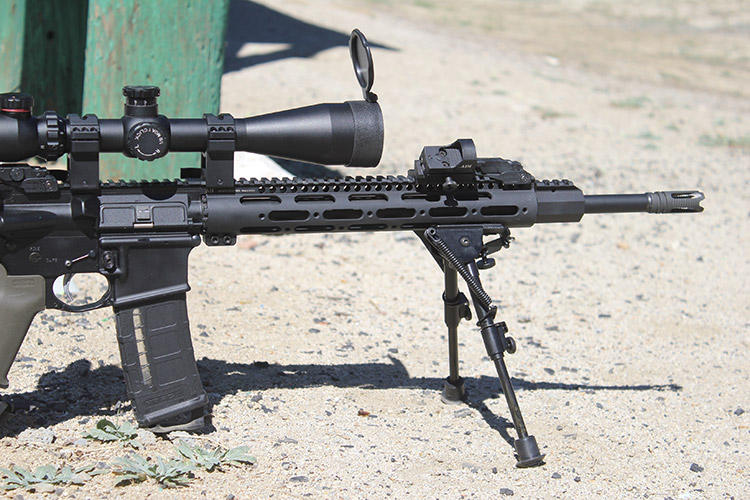 Last week I took part in an informal range day for some fun training. It was also an opportunity to review and test out some interesting products. One of the rifles we had taken for product evaluation was a 5.56mm AR build with an 18" MK19 DPMS barrel and quite a few enhancements. This rifle has proven to be reliable and accurate so it has made a good platform for evaluating optics. I'm a big fan of the Harris series of rifle bipods and given the chance would have setup this rifle with one of their bench rest or prone models. However it happened to turn out that our warehouse had just taken a big order for Harris bipods and where completely out of stock so we had to look for an alternative. NcStar brought out a series of bipods last year which is very similar to the Harris series and we had plenty of those available. We where on a tight time frame so I picked up a compact series ( M1SURPLUS Catalog# CN-ABPGC )  bipod and quickly mounted it to a sling swivel stud under the rifles forend. This particular model is ideal for bench rest shooting as it has the shortest legs with individual adjustments between  5-1/2" to 8" tall. NcStar also offers a taller model ( M1SURPLUS Catalog Item# CN-ABPGF ) which has slightly longer legs that are 7" to 11" tall.  These bipods are designed to attach directly to most sling swivels studs as commonly found under the forend of many popular rifles. Also worth noting is that the bipod has a provision for attaching a sling swivel directly to the bipods. This is important since the rifles sling swivel stud will usually be covered when the bipod is mounted. For rifles that do not have a sling swivel stud, NcStar also included a rail mount adapter and a barrel clamp adapter. These included accessories make this bipod adaptable to many different kinds of rifles both old and modern. 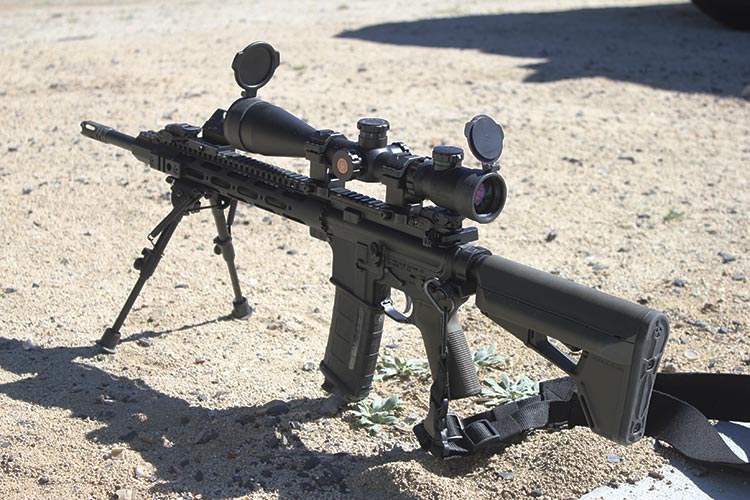 These bipods have a very solid feel to them and they do not swivel or cant. The bipod looks very solid and is made up from a combination of mostly aluminum parts with some steel components and rubber feet. The individual legs can be adjusted to different height positions and can be locked firmly in place. The bipod legs will also flip forward so they stay parallel with the barrel which makes it very convenient for storage and transportation. When the legs are fully extended they have a quick retract capability that is activated by pushing down on a small metal bar. The legs have thick rubber feet and prevent slipping on on most rubber surfaces. My concerns with this bipod where considering the low price of under $30, the manufacture may have compromised on some of the materials. I can tell you that after putting the rifle through several hours of constant training and putting hundred of rounds through the rifle, the bipod performed flawlessly. It stayed firmly in place and did not collapse or show any signs of stress. We ran the rifles pretty hard that day and banged the bipod around quite a bit so I think if there was a weak link it would have showed it's face. I'll keep this bipod mounted up for sometime and will come back later with an update to the review and we will see just how robust these NcStar bi-pods really are.  I have personally tried many different bipods but own only a few select models mostly made by Harris Engineering. Though the Harris brand is still my favorite rifle bipod, I can say with confidence I would definitely consider this NcStar bipod for use on some rifles. Particularly when budget is a constraint or on rifles that may not see heavy duty use, the NcStar will get the job done.

Once installed properly it does the job. Only installation...

The webbing is fine but the end pieces look kinda cheap...